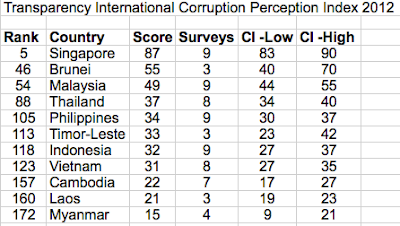 Bangkok Pundit has blogged CPI results from past years here and notes that results from this year aren't comparable to previous years due to changes in survey methodology.

Looking at the scores from the last decade Thailand does not appear to have made significant progress in reducing the perception of public sector corruption - in fact one could argue that the situation has worsened.

In a recent poll conducted by Bangkok University, 88% of Bangkok residents surveyed said that corruption was acute in Thai society, while 12% said it was not. Of the 88%, 58.6% indicated a lot and 29.4% the most.

Bangkok Post report of the survey does not show the breakdown of the 88% - it says, "About 88% believed corruption in Thailand was at its highest level." On this question and a couple others there is a percentage breakdown for the level of agreement with the question posed.

Asked who is most to blame for corruption, respondents said: national politicians 62.9%, local politicians 57.5%, out-dates laws/loopholes 50.1%, Thais not serious about the problem 48.5% and the bureaucracy 42.1%

Asked if the current government is taking the problem of corruption seriously, 35.8% of respondents said yes, while 64.2% felt it was not. 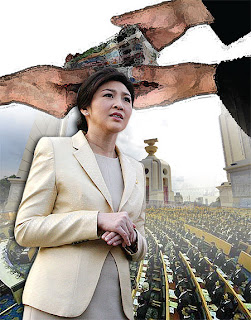