Polls I: Sukhumbhand Vs. Pongsapat

The campaign for the next Bangkok governor is now in full swing, with the election just a little more than a month away on March 3. The top two contenders at the moment are incumbent Democrat Party candidate M.R. Sukhumbhand Paribatra, nickname "Khun Chai Moo", and Puea Thai's Pol. Gen. Pongsapat Pongcharoen. Also in the mix is dark horse candidate Lt. Gen. Seripisut Temiyavet, who previously served as a police commissioner (appointed after coup - 2007-8).

Recent poll results from NIDA and the Democrat party give Sukhumbhand a 5-7% lead, while an ABAC poll gives Pongsapat an edge of less than 1%. The NIDA poll has a large number of undecideds at 40.46%.

Puea Thai firebrand and Deputy Prime Minister Chalerm Yubamroong, of course, has his own version of the polls. Chalerm told the press two days ago that an ABAC poll showed Pongsapat leading Sukhumbhand 42% to 26%. In his press statement, Chalerm even went on to say that he thought the lead is even bigger - maybe 60% to 20%.

Upon further investigation, it appears Chalerm's has the right numbers but for a different question. The 42.8% to 26.4% numbers come from the ABAC poll asking voters in BKK and 16 provinces which party they would vote for if the general election were held today (not who they would vote for in the Bangkok gubernatorial election). 42.8% of respondents said they would vote Puea Thai, 26.6% Democrat and 30.7% other party.

The Democrat party has fared well in the past three gubernatorial elections, winning in 2009, 2008 and 2004. In the July 2011 national election, they won 23 seats, while Puea Thai only garnered 10 seats. The Democrats also won the vast majority of city council seats in the 2010 elections. Furthermore, some observers say Bangkok voters may prefer to have different parties running the city and national government in order to balance power.

This doesn't mean the Democrats are destined to win however. Thai Rak Thai party, Puea Thai's earlier predecessor, crushed the Democrats in Bangkok in the 2001 and 2005 national elections. Sukhumbhand's term in office has not been very remarkable either and a number of controversies currently surround him, such as the DSI investigation into the Skytrain contract extension, an uncompleted futsol stadium and a conflict between the State Railway of Thailand and Chatuchak market. He also took flack for his handling of the 2011 flood and his support for the "giant tunnels". Pongsapat, in comparison, does not seem to carry as much baggage - and personality wise he shows more charisma. Bangkok voters may also be looking for a change and a new face to lead them forward.

Peering back into the 2009 election result, Sukhumbhand won with 45.47% of the vote. Puea Thai's Yuranun Pamornmontri finished second with 29.72%, while in third and fourth were Independents MR Nattakorn Devakula and Kaewsan Athibodi with 16.27% and 7.03%, respectively. Today, Nattakorn is a social and political commentator at Voice TV, which is considered Puea Thai leaning since it's owned and managed by Thaksin's family. Kaewsan, on the other hand, is a staunch critic of Thaksin and company. If Nattakorn or Kaewsan had not run, one could argue that the race would have been closer - perhaps 52.5% to 45.9%. It will be interesting to see how everything shakes out come election day.

It also includes members from Puea Thai, Khunying Sudarat Keyuraphan, and Korn from the Democrats. Combining the percentages from those two would give Pongsapat 44.9% and Sukumbhand 38.60%, assuming those supporters would back the party.

In this poll, the only area of Bangkok Pongsapat had an edge was in the north where he received 21.72% over Sukumbhand's 21.36. 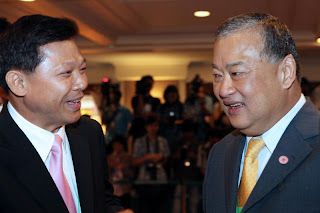 Email ThisBlogThis!Share to TwitterShare to FacebookShare to Pinterest
Labels: Polls